Vancouver  B.C. — Direct action is the greatest financial liability faced by resource extraction corporations. Throughout the history of TMX (formally, “Kinder Morgan Pipeline”), Indigenous peoples and their accomplices have shown up time and time again ready to fight back and defend the lands our nations have protected since time immemorial. The financial impact of Indigenous led land defence continues to cost Trans Mountain Corporation money every single day.

Man camps and transient workers are part of the ongoing genocide of MMIWG2S (Missing and Murdered Indigenous Women, Girls and Two-Spirit People). Firelight Groups 2017 report indicated a sharp increase in sex trafficking due to the man camps and their housing of transient workers. Additionally, the harassment faced by Indigenous women and 2-spirit peoples exercising their ancestral rights to the land, by the hands of the RCMP in the name of protecting corporate property and the continuation of resource extraction projects, furthers the systemic violence and criminalization of Indigenous land defenders and those exercising their right to live sovereignly on their people’s land. Amnesty International has also condemned the violence against Indigenous women, 2spirit peoples, and children, as well as, the criminalization and over-policing of Indigenous land defenders perpetuated, and further enabled, by the Crown corporation known as so-called “Canada.”

We are in a climate crisis and Indigenous peoples title rights to the land being upheld will be essential to our planet’s recovery. The construction of a pipeline is a violent process, and involves the desecration of lands and waters that are sacred and are relied upon by many communities. We, as Indigenous peoples, have every right to exist on our own ancestral lands and defend them in any and every way we see fit to ensure their survival for coming generations. No “preventative measures” taken by any company, especially those that have illustrated a clear disregard for Indigenous and natural life alike, could possibly provide safety and security for the future of the land.

Secwepemc land defender, Kanahus Manuel who lives in the Tiny House Warriors village in the path of the pipelines: “Trans Mountain is misleading insurers by suggesting they have secured the land base and Indigenous consent for the Trans Mountain pipeline.  They do not have consent from the Secwepemc and failure to recognize Secwepemc title, land rights and indigenous jurisdiction, will only result in more conflict, direct actions, blockades and Indigenous land occupations which will increase the risks and economic uncertainty for Trans Mountain and its construction deadlines.”

“Direct actions will continue to intensify and escalate because Canada, its courts and its crown pipeline company refuses to recognize the legitimate and inherent Secwepemc land rights. The basis for these risks are the jurisdiction and land rights of the Secwepemc and the obligation of the Canadian government under both domestic and international law to obtain consent from the Secwepemc as the Aboriginal title and rights holders. These risks have been amplified by the Canadian government’s approval of the pipeline despite the lack of Indigenous consent. The government has failed to even fully engage the Secwepemc. They are further amplified by the declarations of solidarity among the Secwepemc, other Indigenous Peoples, non-Indigenous NGOs and many municipalities, including the City of Vancouver. Finally, these risks are amplified by the assertion of Secwepemc land defenders that they will stop the pipeline ‘by any means necessary,’” say the Braided Warriors.

“We are here in solidarity with the Secwepemc peoples in their fight to stop foreign invasion of their lands and protect their lands, waters, animals, and peoples. As settlers it is our role to be accomplices to Indigenous land defenders and put ourselves on the line to stop the ongoing colonization of Indigenous territories and peoples. This pipeline will affect all of us and all future generations, but first and foremost will impact the nations and peoples along this route, including Secwepemc people. Today we stand on unceded, unsurrended, illegally occupied Secwepemc land to show that we will not stop until the pipeline is terminated and the land is returned to the rightful title holders,” say settler accomplices locking down. 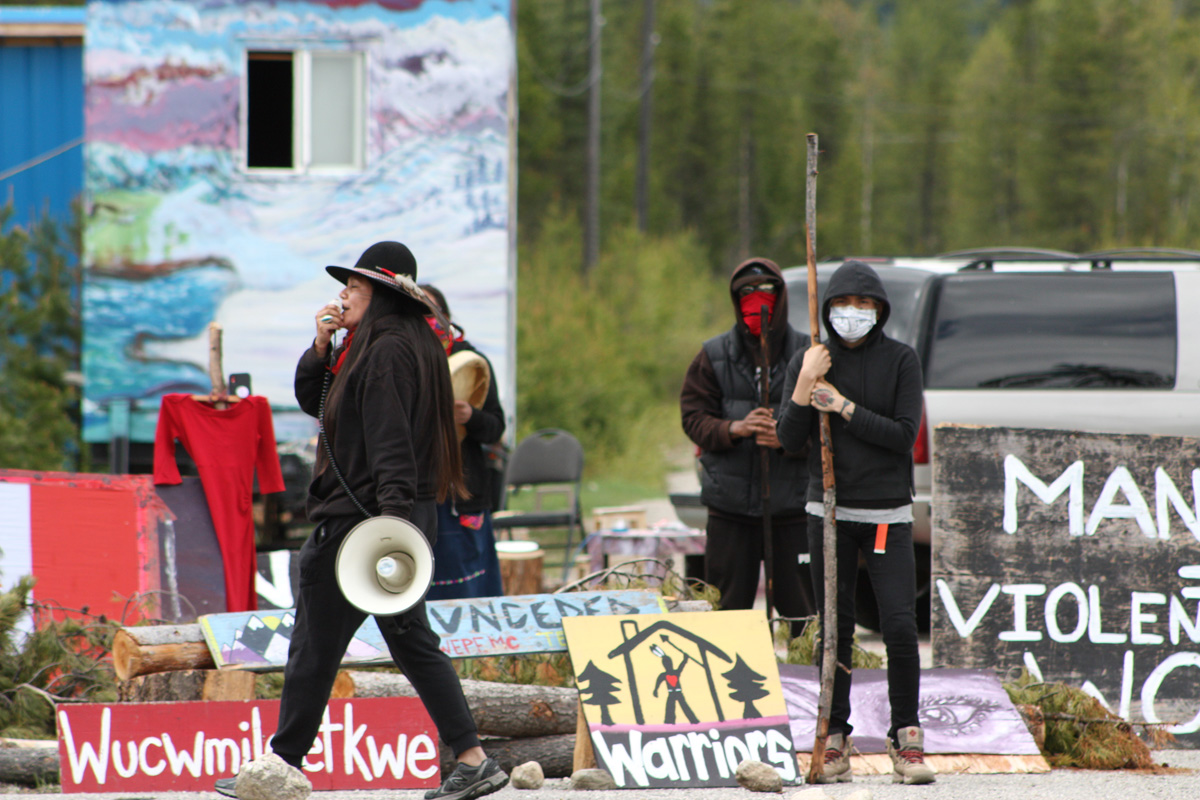 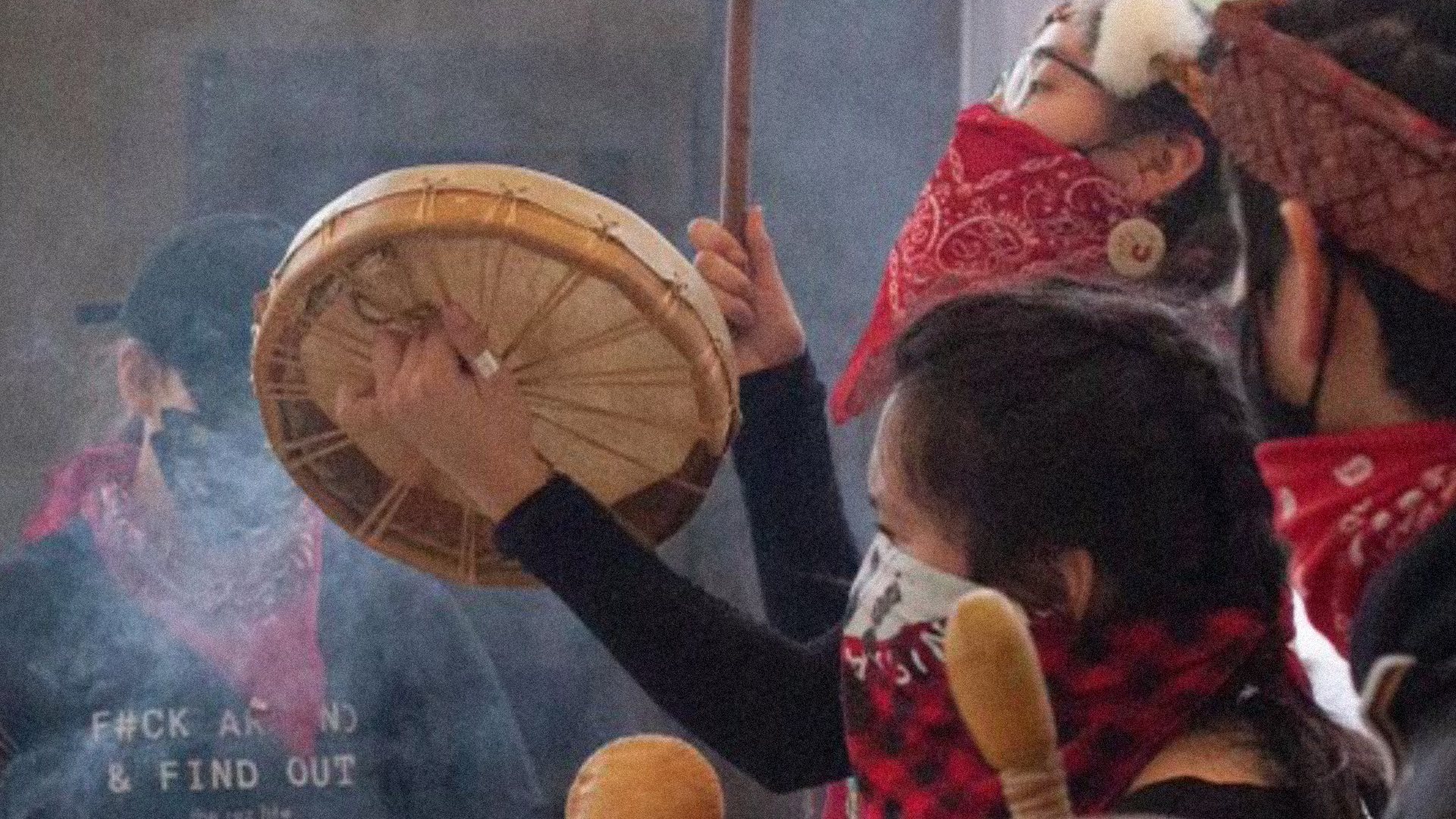